Cosmonaut has its origins in the tumultuous events that lead to the collapse of the Soviet Union in 1991-92. Seen from afar, this was history unfolding as a series of media images, in which the crowd – on the street, in the square, occupying the Duma – was the principal actor.

In Cosmonaut, a Russian cosmonaut is stranded in orbit around the earth as the communist bloc collapses. On earth and beneath the stars, a woman effects a connection between herself and the distant astronaut. The opera takes place over four orbits as the cosmonaut listens to grabs of intercepted transmissions while the political situation on Earth twists and turns. During this time, he communicates for brief moments with Angela, isolated in her suburban Australian bedroom.

Combining music and sound, satellite transmissions and a twentieth century mediascape that is central to the themes of the opera, Cosmonaut's libretto was inspired by the fate of Soviet Sergei Krikalev, who was in orbit as the USSR fell apart.

'This is a rare thing, an opera about ideas, I don't think I have seen a work as adventurous in its exploration of the nature of modern history since John Adams' Nixon in China... Chesworth's score is rich in effects and references to other genres' - The Age, Melbourne 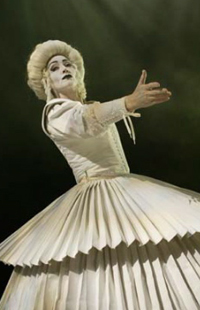 Featuring a virtuosic performance, Helen Noonan plays a Diva of Divas, channelling all those great opera women who have gone before her. Serving an eternal sentence in the purgatory of her own imagination, this Diva is the quintessence of the world's greatest opera singers - or perhaps a deluded person who thinks she is extraordinary.

Her story is told through a combination of original soundscapes, well known arias and distinctive performative gestures. Distinctions between art and life, fantasy and reality, tragedy and comedy become blurred as the diva possesses the stage.

Recital is loosely based on 'Recital 1 (for Cathy)', a music-theatre work written by Luciano Berio for his then wife, singer Cathy Berberian. As with Berio's work, Recital draws on arias from the performer's own repertoire of operatic arias.